As part of a newer, healthier Pablo, I am on the hunt for making a delicious turkey burger.  The biggest challenge with turkey burgers are flavor and lack of moisture.  Or, said another way: the lack of fat that makes a turkey burger healthy, also makes it suck.  As far as flavor goes, I mixed the ground turkey meat, soy sauce, salt, pepper, ramp and garlic powders.  I also figured this would be a good application for sous vide. 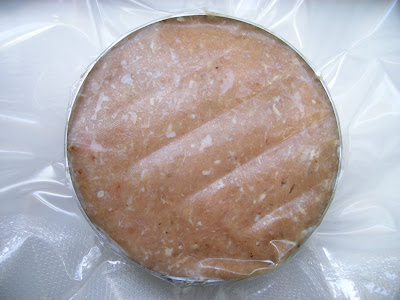 You are probably asking why there is a ring mold in the bag.  This was done to maintain the shape of the burger during the vacuum sealing process.  Even on a weak sealer, a burger will end up tapering on both sides. 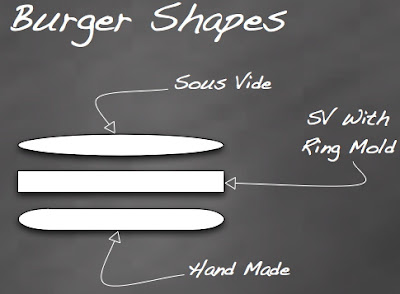 As we can see in the picture above, tapering makes your burger look like a flying saucer.  This is less visually appealing, but there is a very utilitarian concern here as well.  If it is not flat on each side, then less surface area touches a grill or griddle.  While a ring mold gives us something that looks a little more manufactured, it is at least somewhat familiar looking.

Finally, while the pic doesn't show it, there are actually two burgers in the ring mold separated by a piece of parchment paper (the ring mold was pretty thick).  While it was in the bath, I started to heat up my trusty grill pan.  After it came out I gave it a quick spin on the grill pan to give it some texture and additional color and flavor. 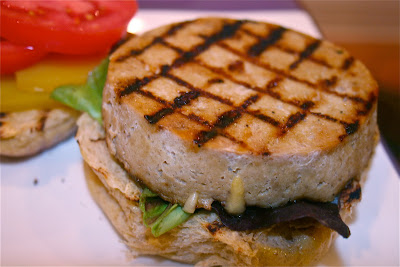 After a quick turn on the grill pan, I put it on a bun with some lettuce, tomato, asiago cheese and ketchup.  The final product is below. 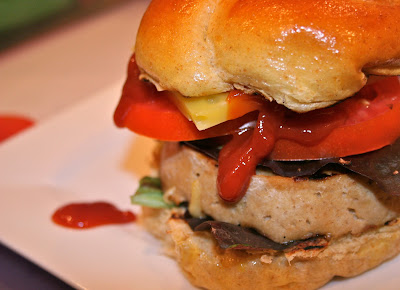 It was a decent first try.  Next attempt will include the following changes: