The blogs are all a-twitter about California's (and other states) recent push to ban the possession and sale of shark fin.  This is legislation designed to protect sharks against a practice called shark finning.  Shark finning is the process of harvesting the fin of the shark and discarding the still live shark back into the ocean, where it will either drown, starve or be consumed by other predators.


There are a number of reasons why sharks should be protected from senseless and wasteful killing through finning. First, sharks are apex predators in the marine food chain and, without a proportionate number of sharks, an ecological imbalance with potentially disastrous repercussions will occur in the world’s oceans. Common sense and an overview of evolution show that sharks have evolved to a vital stabilization role in all oceans.  Sharks prey on weak and/or sick fish which, over time, creates better genetically and evolutionarily capable species.  Sharks also keep populations in check, such as the octopus population in Australia and the stingray population in Florida.

Basically, sharks sit just below us on the top of the food chain (notwithstanding the occasional surfer) and they help control the population of all other sea life. It's like that Star Trek episode, The Trouble With Tribbles.  Only instead of us being covered in cheaply manufactured stuffed animals, we all die.

The United States government recognized this and attempted to ban the practice of shark finning in 2000.  Congress passed the Shark Finning Prohibition Act (SFPA), which criminalized the following actions:
You would think this would effectively curtail the practice of shark finning in US waters.  Now I will turn to some excellent analysis of a court case that will go down in history as the silliest name for an environmentally tragic court case.

United States v. Approximately 64,695 Pounds of Shark Fins
Two years after this legislation was enacted, The King Diamond II was detained off the coast of Guatemala when the US Coast Guard found approximately 65,000 pounds of shark fins aboard the vessel.  The fins were seized and the US government won a district court ruling for the forfeiture of the fins.

Tai Loong Hong Marine Products, Ltd. (TLH), who chartered the KDII,  appealed the decision on two technicalities within the SFPA:
The 9th district court maintained that a person of reasonable intelligence wouldn't conclude that the activities of the KDII would classify it as a fishing vessel.  Unfortunately, a person of evil super genius intelligence would conclude that the courts would come to that very conclusion.  Let's do some quick math on this single incident.

While the bad guys won that day, Congress recently enacted the Shark Conservation Act of 2010 (in 2011) which attempts to patch the loopholes in the SFPA.  This bill does contain an exemption for smooth dogfish sharks, allowing state licensed fishing vessels to separate fins from the shark as long as the total weight of the separated shark fins do not exceed twelve percent (12%) of the total weight of the smooth dogfish shark bodies when landed.  This percentage is exceedingly high according to the amazing blogging team at Southern Fried Science:


This 12% number appears to come from thin air, since the worldwide standard is around 5% and the National Marine Fisheries Service calculated that the fin to weight ratio for smooth dogs is around 3.5%.

It is a shame that this loophole was necessary to get the bill passed, and we can fully expect the King Diamond III (or perhaps the Danzig I) to somehow use this loophole to do terrible things.  But, it was the only way to get North Carolina Senator Richard Burr to sign the bill.  North Carolina hosts Smooth Dogfish Shark fisheries, and his constituents apparently need to be able to separate shark fins from shark onboard the vessel.
The unfortunate truth in all of this is that even if the US managed to completely opt out of all shark finning and US commercial fisheries abided by established quotas, it won't be enough.  Other countries still consume most of the shark fins and also have the least regulation.
What about the hypocrisy of the shark fin possession laws?
As mentioned in the beginning, this post is inspired by the efforts of west coast state legislation attempting to outright ban the sale, distribution and possession of shark fins.  I understand why some Chinese-Americans could be frustrated with the potential banning of a cultural symbol and delicacy.  But in a game of rock, paper, scissors where one player throws tradition and the other throws the-whole-fucking-planet, tradition loses.

I completely agree that it is hypocritical that the same people who ban shark fins don't vigorously defend the blue fin tuna and Caspian caviar as well.  Instead of being angry that you can't contribute to the destruction of the planet, pick up the fight and help protect other species.

Email ThisBlogThis!Share to TwitterShare to FacebookShare to Pinterest
Labels: Don't Kill Dying Things, Shark Finning Sucks, Why Is This Even A Debate, Yelling At My Television

Earlier this week, SousVide Supreme announced their entrance into the chamber vacuum space.   An OEM'd VacMaster VP112, this tabletop chamber vacuum sold out within hours of the announcement.

Assuming that this isn't the result of EAT, LLC doing an incredibly small first run of chamber vac's, I am surprised that their customers would rush to buy an $800 chamber vacuum to assist with a $400 water bath.  You'd think that people that had the budget for the chamber vac would have bought an immersion circulator instead of the SousVide Supreme.

It is possible that once people start cooking sous vide they become more willing to invest.  Maybe I am also underestimating the number of professional kitchens using the SVS.  If that is the case, it makes me wonder if we will see a high end SousVide Supreme1.   Finally, I wonder if there was a lack of awareness around the VP112's existence.  It was on my list to research this product given its (relatively) affordable price point.

So, any of my readers willing to speculate?  Or if you bought one of these, can you tell me what was compelling about this?

1Perhaps they can call it the SousVide Supremerer
at March 05, 2011 1 comment: 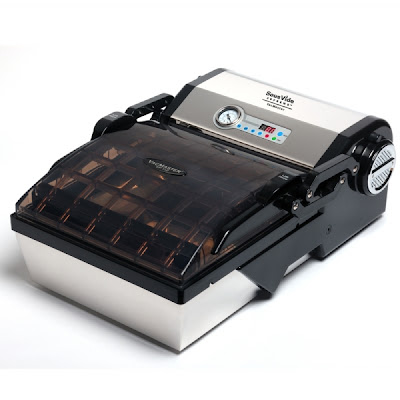 ps: Will have more to say later.