I have written about this before.  But!

It is sooo awesome.  It is sooo easy.  It is perfectly tender.

1. Buy whole and fresh from a fishmonger you trust.  You can have them do a first pass on the octopus and remove the guts, the beak and the eyes.

2. Use kitchen shears to break down the octopus into a head and tentacles.  I chuck the part of the octopus that connects the two (it is where the beak used to be).

3. Wash the octopus parts.  They generally chill out at the bottom of the ocean.  That basically means mud.  Mud is not delicious.  Make sure to get rid of all of the grit.  There is something about this step that makes me respect the fact that the octopus was a living creature.  A delicious, living creature.  The suction cups open up when you rinse them under the faucet.  The suction cups will also latch onto you. 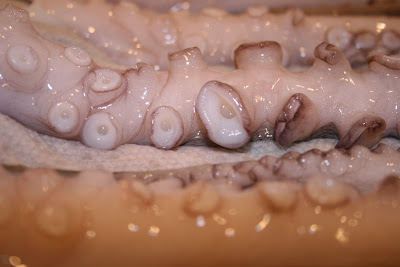 5. I mixed smoked paprika, dried oregano, salt, and pepper together and let all the goodies steep in olive oil for a little while.

6. Put octopus and oil mixture in the bag and pump air out. 7. Put it into a water bath at 180F.  I generally let it cook for a a couple of hours.  The end result is awesomely tender and delicious octopus inside of a bag full of octo-umami-goo.  You can take it and reduce it down for a sauce if you like.   I ended up taking the resulting octopus and added it to pasta one night. The next night, they were used for octopus tacos with chipotle, shredded cabbage, avo, pickled red onion stuffed into homemade tortillas.   Then stuffed into my gaping maw.