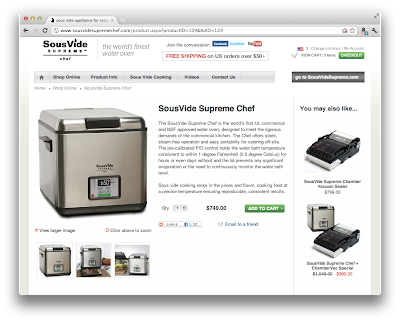 The price of the SVS Chef is 750$ USD, which I believe is telegraphing where they think they can win against other, more established players in the commercial sous vide market: larger kitchens.  The only way I can see a purchasing justification of 250$ more than the SVS is that there are kitchens where UL and NSF ratings influence the decision.

It's a challenging price point, because for an extra $50, you can purchase a Polyscience Sous Vide Professional.  The SVP can handle about three times the volume that an SVS Chef can with a higher degree of accuracy.  Being circulated, it is also going to be able to recover from the temperature drop when larger quantities of food are placed in the water bath.  These factors are pretty compelling from a cook's perspective.

Ultimately, I think having a model geared towards the professional kitchen makes a lot of sense.  I am curious to see how the SVS Chef fares in the marketplace.

Anyone considering purchasing one?  If so, tell us in the comments below?
at May 21, 2012