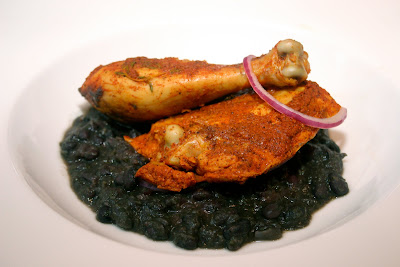 It has long been on my list to make that amazing slow roasted pork dish of the yucatan: cochinita pibil.    Soak pork or chicken in a marinade made with a base of brick red achiote, garlic and sour orange juice, boosted with powerful spices like cinnamon, allspice, and clove. 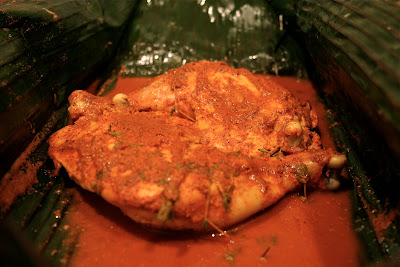 After an overnight marinade, wrap everything up in a banana leaf package, and let it roast for hours.  Serve with pickled onions augmented with the smoldering habanero chile.

Or in my case, toss it in a plastic bag, vacuum seal and put in a 146 degree waterbath for a two hours.  I was worried about several factors going into this:

Would the fresh garlic create that plastic-y, overly garlicy flavor that it is known to do?  The answer is: nope!

Chicken isn't pork, and its leanness doesn't really let you do any magic with longer cook times to achieve great results.  Would the chicken work?  The chicken was unbelievably juicy and tender, but I don't think this resulted in a superior flavor or texture.  I would much rather have traditional slow roasting over fire or even in an oven.  And I even finished the chicken in the oven afterwards. 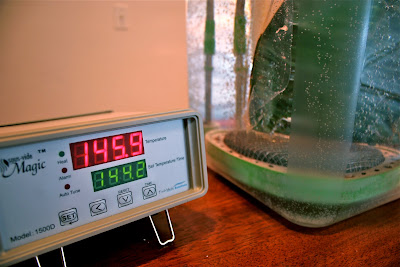