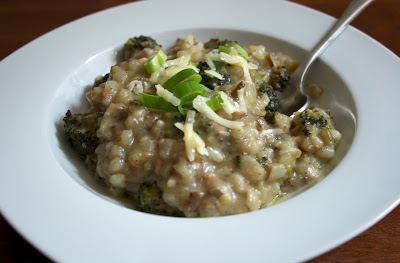 When your dish has a word or phrase in quotes, you are probably being a heretic.  This act can be forgivable when performed artfully.  When the name of your dish has more quotes that words, you are being sacrilegious.  Fortunately for me, I don't work in a kitchen, and like ten people read my blog.

For those ten that do, I bring you a special treat.  An actual recipe.  Not just a recipe but a photo of some food I actually made.  I usually veer away from this being a cooking blog because I don't think all that highly of myself as a cook or as a photographer.  And really, who needs another dipshit on the internet writing recipes.

But hey, it's 4th of july.  And I was inspired by someone on twitter who twoted:

I thought this was clever and figured I could embiggen the cleverness by subbing out rice for potato.   I used my fingers' mortal enemy, the mandoline, to thinly slice the potatoes. Then I cut the slices down into rice-ish sized pieces of potato.  I think potatoes release starch better than traditional risotto rices and also has a shorter cooking time.

And, really, what's more American than the loaded baked potato.  Simple carbs?  Lots of fat?  Minimal use of nutritional vegetables?